Did you look at this picture and say ... aaah! grandpa's house in Alur? Malur? Udupi? This is actually an ancient church in California.
There are many missions and pueblos on  El Camino Real. These missions are held in great reverence. They are the beginning of modern occupation of American Land in this area. A mission is basically a church that brought religion, modern life and community feel to the people in that area. These missions in particular also protected the land from other occupation.


We locate San Luis Obispo established in 1772. With difficulty we find a parking place... most streets here had  'limited parking access'. The place is serene and takes us back into history. We walk through the vine covered archway in obedient silence. 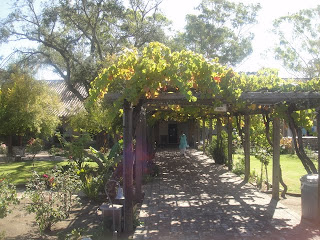 Soft strains of music fill the air. Some girls are practicing for a local Halloween event behind loosely shut doors

The stone well, the large bells ,the flat raised seating area in the porch,  the grape laden archway ... for the Americans it must seem ancient ... and from the Olden Times. ... It just reminds us of India and Grandpa's home in the village.... (replace bells with a pulley and rope .. raatey-hagga) 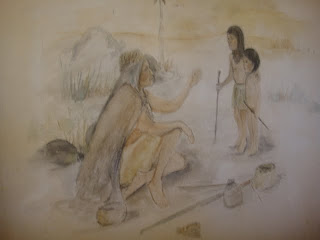 Paintings of Indians - the original occupants are called Indians thanks to a mistake that Columbus made!! -give us a hint of the people who must have been enjoying the land before the missions arrived! 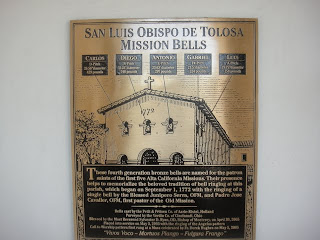 This country has great respect for history. And a pride in the past. And HISTORY is preserved and showcased with care.
I now wish I had kept, Anna's radio, his travel typewriter, Ajja's Shanbhog desk, Amma's Singer Sewing Machine, Tata's hand made radio ...
but we were in a hurry to move into the future
and wanted to escape from the past!

Hey, thanks for stopping by. Do tell me what you think.

This love for travel and this PHOTO BLOG started by my dear one lives on. Explore. Enjoy. Click on the image.